Oil was discovered in Bahrain. Socal begins a year-long series of negotiations with the Saudi government.

The US government bestowed upon the US member companies a tax break equivalent to 50% of oil profits, a deal known as the Golden gimmick.

Aramco confirmed scale of Ghawar and Safaniya, the largest onshore and the largest offshore field in the world, respectively.

Liquefied petroleum gas(LPG) - propane and butane - was first processed at Ras Tanura and shipped to customers.

King Fahd visited Saudi Aramco, Dhahran, on Aramco's 50th Anniversary to inaugurate the Exploration and the Petroleum Engineering Center (EXPEC), a milestone in the Saudization of the company's operations.

Company Completed a program to build 15 very large crude carriers. Saudi Aramco President and CEO Ali I. Al-Naimi is named the Kingdom's Minister of Petroleum and Mineral Resources, and chairman of Saudi Aramco. Abdallah S. Jum'ah was named the CEO, President, and Director of Saudi Aramco.

HRH Crown Prince 'Abd Allah inaugurated the Shaybah field in the Rub' al Khali desert, one of the largest projects of its kind in the world went on stream. The Dhahran-Riyadh-Qasim multi-product pipeline and Ras Tanura Upgrade project were completed. The second Saudi Aramco-Mobil lubricating oil refinery (Luberef II) in Yanbu' commenced operations.

Petroleum Intelligence Weekly ranked the company the first in the world for the 11th straight year, for the country's crude oil reserves and production. Aramco Gulf Operations Limited was established to administer the government's petroleum interest in the offshore Neutral Zone between Saudi Arabia and Kuwait. New facilities were under construction in the Haradh and Hawiyah gas plant projects to process gas for delivery to the Master Gas System and to domestic markets.

Hawiyah Gas Plat, capable of processing up to 1.6 billion standard cubic feet per day of non-associated gas, came on stream.

Haradh Gas Plant, completed two and a half months ahead of schedule.

Saudi Aramco and Sumitomo Chemical Co., Ltd signed a joint venture agreement for the development of a large , integrated refining and petrochemical complex in the Red Sea town of Rabigh, on Saudi Arabia's west coast. This became known as Petro Rabigh.

Saudi Aramco started production from Karan Gas Field, with an output of more than 400 standard cubic feet per day. 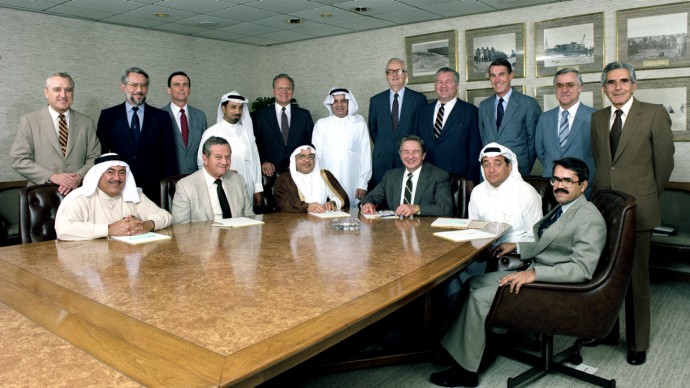 HISTORICAL HEADWAY OF THE COMPANY

Saudi Aramco operations span the globe, despite being headquartered in Dhahran. Company operations include exploration ,producing,refining,chemicals,distribution and marketing.

A significant portion of the Saudi Aramco workforce consists of geophysicists and geologists. Saudi Aramco has been exploring for oil and gas reservoirs since 1982.Most of this process takes palce at the Exploration and Petroleum Engineering Center(EXPEC). Originally, Saudi Aramco used Cray Supercomputers (CRAY-1M) to assist in processing the colossal quantity of data obtained during exploration.In 2001, Saudi Aramco decided to use Linux clusters as a replacement for the decommissioned Cray systems

This is the most crucial process and as such accounts for the largest segment of the Saudi Aramco workforce.Drilling new wells efficiently and then maintaining them requires the company to employ a large number of engineers.With the increasing global demand for oil, Saudi Aramco seeks to expand its oil production. To do this the comapny seeks to expand the number of engineers and geo-scientists it employs.

While the company did not originally plan on refining oil , the Saudi government wished to have only one company dealing with oil production. Therefore , on july 1 ,1993 the government issued a royal decree merging Saudi Aramco with Samarec, the country’s oil refining company. The following year, a Saudi Aramco subsidiary acquired a 40% equity interest in Petron Corporation, the largest crude oil refiner and marketer in the Philippines. Since then, Saudi Aramco has taken on the responsibility of refining oil and distributing it in the country. Currently, Saudi Aramco refining capacity is more than 4 million barrels per day (640,000 m3/d) (International joint and equity ventures:2,060 Mbbl/d) (328,000,000m3/d), domestic joint ventures: 1,108 mpbd, and wholly owned domestic operations: 995 Mbbl/d (158,200,000 m3/d.) This figure is set to increase as more projects go online. Additionally, Saudi Aramco’s downstream operations are shifting its emphasis to integrate refineries with petrochemical facilities. Their first venture into it is with Petro Rabigh, which is a joint venture with Sumitomo Chemical Co.that began in 2005 on the coast of the Red Sea.

Saudi Aramco has taken a keen interest in optimizing its processes over the last decade. To this end, it has employed about 500 engineers and scientists specializing in different aspects of the hydrocarbon industry. There are two R&D entities in Saudi Aramco: 1) Exploration and Petrolium Engineering Center Advanced Research Center (EXPEC ARC) which is solely managed by Exploration & producing and focuses on upstream research , and 2) The Research and Development Center (R&DC), which focuses on downstream research and includes bio-research. Leading research undertaken at these two major facilities provides Saudi Aramco with competitive technology solutions throughout the vast range of its petroleum-related activities.

Saudi Aramco also provides several services to its employees. It maintains a large hospital and provides health insurance for its employees . it also maintains several fire stations , both industrial and residential. Saudi Aramco introduced its Industrial Security over two decades ago. This security force primarily ensures the safety of the company’s industrial and residential areas. Saudi Aramco has operations all over the kingdom and therefore, it often needs to transport employees between operations. It currently maintains and operates a fleet of 39 aircraft (18 fixed wing and 21 rotor-wing) to provide this support function. Also , Saudi Aramco has intensive career development programs under the Career Development Department. These includes PDP (Professional Development Program) for fresh graduates and ADP (Advanced Degree Program) for Master and PHDs studies